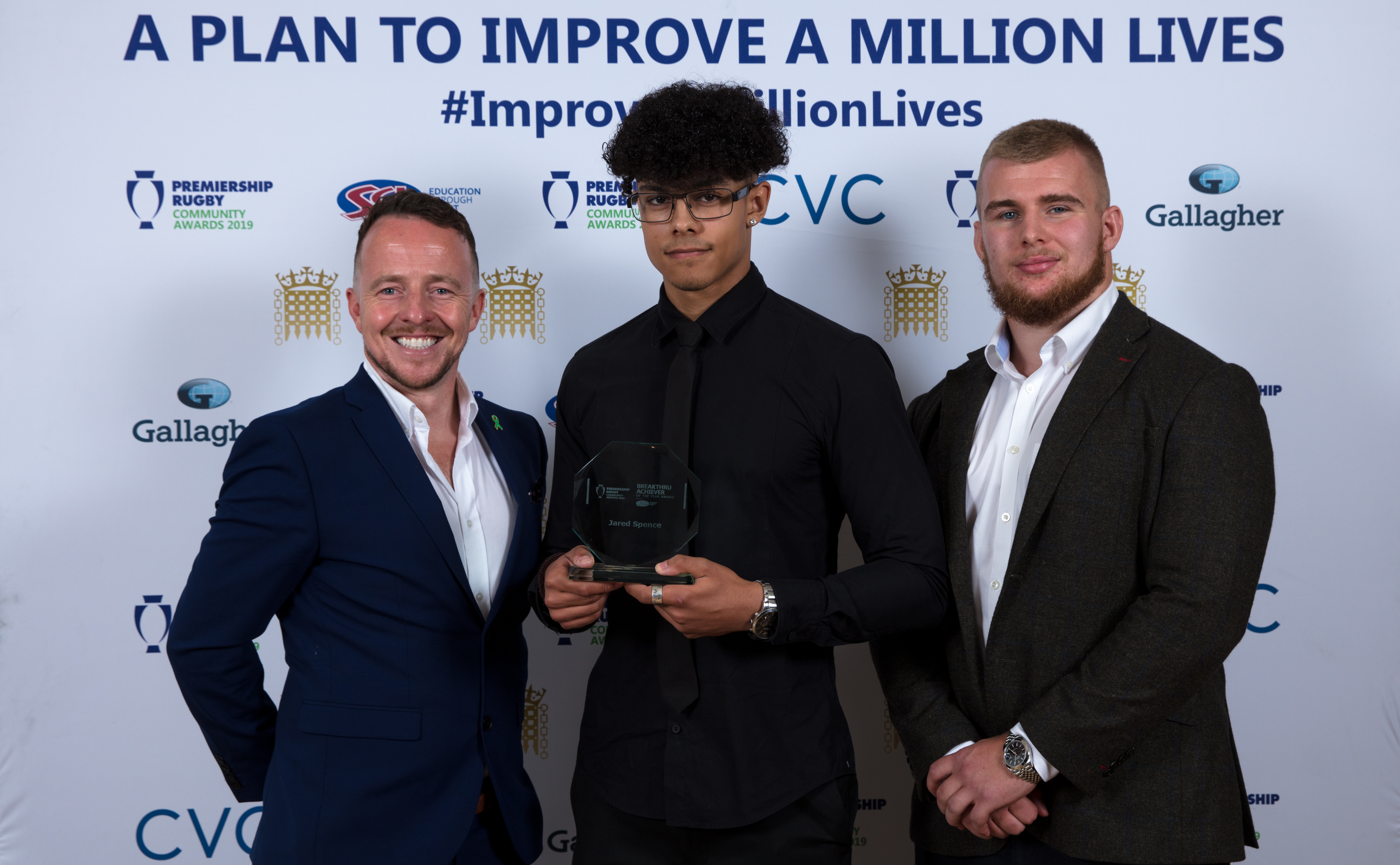 Gloucester Rugby’s Jared Spence claimed the SCL BREAKTHRU Achiever of the Year Award at the 2019 Premiership Rugby Parliamentary Awards, which took centre stage at the House of Commons on Wednesday.

More than 310,000 people every year are assisted in some way through Premiership Rugby’s ‘Plan To Improve a Million Lives’, with initiatives designed for all walks of life.

And yesterday just some of the success stories from the past year were celebrated at the star-studded event, including the SCL BREAKTHRU Achiever of the Year Award which recognizes the work undertaken on Premiership Rugby’s HITZ programme.

Newcastle Falcons’ Courtney Bell and Wasps’ Danielle Tuson were also shortlisted for the award, but Jared scooped the prize having gained his gym instructor level two qualification through the programme as he works towards his dream of becoming a personal instructor.

“It means a lot to have won the award,” said Jared.

“I’ve had quite a difficult time and I feel this is one of the biggest points in my life. If you were to tell me a year ago that I would be here winning this award, I wouldn’t have believed anything like this could happen.

“My family and friends have definitely noticed a difference in me – I would just sit at home doing the bare minimum.

“Now I’m trying to make myself a better person and I wake up every day thinking what can I do today to better myself. I feel a lot more confident now than a year or two ago.

“I’ve just got my level two gym instructor qualification and now I’m aiming for level three – I want to be a personal trainer.

SCL’s partnership with Premiership Rugby continues to go from strength-to-strength, with the two organisations improving the lives of 16-18-year-olds through the award-winning HITZ programme.

A number of SCL staff were in attendance at the event including the company’s Managing Director Brad Rushton, who is proud of the HITZ programme.

He said: “It’s an incredible programme and it’s a real feel good, not a dry eye in the house provision. You see the work that the tutors and the HITZ officers do and the impact that it has on the lives of young people.

“We engage with young people who have not necessarily had the greatest start from an academic point of view and you can see how the power of sport has an impact on young people.

“They use that to build a relatable curriculum and really give these young people life skills that make a real difference.

“You see their journey from someone who’s not necessarily been engaged with education going through to having really meaningful careers and making a difference.”

Passionate about the programme and delighted to be present at the event, he added: “We’re really privileged to be working with Premiership Rugby and all of the clubs on the programme.

“I’m extremely proud and it was a really easy decision when we were asked to sponsor the BREAKTHRU Award.

“We know how sport combined with education can change people’s lives and it’s fantastic to see the journey that many young people go on. We’re really proud as a business to have the opportunity to be involved.”

Ian Cooper, Lead for SCL on the HITZ division, presented the award to Jared and is delighted with the work been undertaken on the programme.

“It’s fantastic and very humbling at the same time to be here,” said Ian.

“One of the main aims with SCL is to leave a legacy in every community we serve, be it from Newcastle all the way down to Exeter.

“I think the BREAKTHRU Award really epitomises everything we do in terms of leaving a legacy. It’s about helping that young person on their journey and seeing them flourish from there.

“Sport is a catalyst, both physically and mentally in equal capacity. It gets you active and keeps you healthy, but it also helps you clear the brain.

“If we can promote the combination of education and sport, and the huge impact it can have on people’s lives, that can only be for the best.”

There were four awards handed out at the event, with the Minister for Sport and Civil Society Mims Davies applauding all those involved.

She said: “It is fantastic to see how committed Premiership Rugby and its clubs are to improving local communities. From health and education, to diversity and social inclusion, it is vital that we use the power of sport to help change lives for the better.

“Project Rugby, for example, is doing great work bringing young people from BAME communities into the game for the first time and HITZ is helping to get children back into education or employment.

“Walking Rugby is also helping older people to overcome social isolation and loneliness, which is great for me to see as Minister for Loneliness.

“I applaud all of this great work and all of the people being celebrated at the Premiership Rugby Community Awards.”